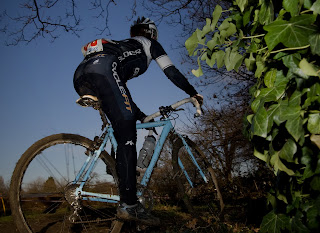 The training has been going better. Since I last blogged I've made progress and put some good winter miles under my belt.

The first was a ride out into Kent with Velo Club Londres' Bryan Taylor. Bryan has been a friend for a couple of years and has taken me to race in Belgium on two occasions. I'm a lucky girl: I've messed him about quite a bit with wobbles of confidence and badly timed personal issues which have interfered with agreed race schedules. But Bryan has been a star and now that I've moved onto his "patch" he'd even offered to show me some riding out in the Kent countryside.

The weather we've been having meant that there were some icy patches and one flooded road en route but the stunning views and neat climbs made up for it. Bryan's promise of a "steady two and a half hour ride" turned into a 100km epic (give or take the odd km), but made me feel like I'd earnt my scrambled eggs back at Cafe St. Germain in Crystal Palace.

Taking heed of some wise words, I didn't party hard over new year. I've never been a big drinker and getting roaringly drunk during a block of training doesn't make much sense to me. This year I had another reason to stay the right side of sobriety: the Velo Club Londres' New Year's Cross Madison.

From here on this race shall be called "Mudison". Because it was muddy.

Until this week I hadn't raced my cross bike. Now I've raced it twice. I'm fairly useless and completely terrified of riding on the slippery mud with other proper cross racers around me. I really wanted to come and support Bryan and the VCL bunch, lots of whom I know from the Crystal Palace Crit series. I was met at sign on by Bryan's lovely wife Helen and felt encouraged: it's easier to be rubbish when there are nice people around to make you feel better about it.

After my practice lap I burst into tears and begged Sam to take me home: I was convinced that this was all going to be too much. Sam was reluctant to listen and the whole thing was made worse by the fact that London Cycle Sport's John M had given him a helmet camera to wear. I had to race. I couldn't back out. I was Sam's partner and the whole point of the Mudison is that after a lap you sling your buddy forward for their turn. As if dealing with off-camber climbs, muddy berms and scary gravel wasn't bad enough? Another local hero, Matt Seaton came forward to say hello but the poor man had to quickly scurry off when he realised I was a Mudison-Mess.

Competely convinced I was going to die, kill someone or at the very least need air lifting off the circuit, I joined my fellow competitors for the first change over. Nervous as hell I managed to stop sobbing and was rallied by Jo McRae and Mr Blackman. Hearing, "Cor blimey - Charlie Blackman's here, " and "Hello love, didn't think you did mud" from some of the old-boys didn't help. I squeezed my way forwards to wait to take my turn and tried not to vomit.

After about 45 minutes I began to relax. I stopped feeling quite so terrified and I tried to get some speed up. I even got cross when the umpteenth junior flew past me. By my third lap I was smiling thanks to encouragement from John M, Rachel P, Leona, Maryka and Phil J (who also provided me with the photo). My skill level is still rubbish but at least I didn't get taken out (Bryan did try), or hurt anyone else. I was relieved to let Sam finish the last lap and pootle home unscathed, promising myself I'd never bother racing cross again.

So why did I enter the London League race yesterday? Heaven knows. It might have been the fact that everything here seemed too icy when I woke at 6am to make it out with Elise and the Pearson's girls. Or friend Jo Munden's encouragement. Perhaps it was hubris: "I can do this now"? By the end of the first lap I was vying for the accolade of lanterne rouge, with a gentleman who seemed even more shell shocked by the ultra-technical course than I did. Mercifully about 10 minutes later, my rear-mech folded itself into my wheel.

I did enjoy the race but I'm just not there yet. The fast girls and guys make it look incredibly simple as they ride fluidly through the mud. Corine Hall and Dan Duguid were inspiring to watch. I feel that cross isn't a world away anymore and that I can face cycling in the snow we have forecast for the week with a great deal more aplomb than previously. And I did put myself on the line for the second time in a week. Which has proved to me that really, I am a racer.
Posted by Charlotte at 10:08 PM