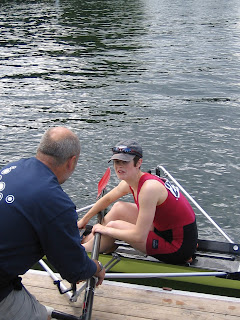 Looking back through my photos, I found two clips of me at Henley Women's Regatta in 2004.

The first is of the Quarter Finals:


I entered the competition as a Lightweight Elite Sculler. Earlier that year, I'd felt bitter disappointment when I couldn't attend final trials for GB team selection.  I'd struggled with keeping my weight below 59kg and it had begun to make me ill.

I don't think I've ever been as focused as I was that season.  Utterly driven, I wanted to see what I could do.  Always a difficult athlete, those at my rowing club, Vesta RC were incredible for supporting my every stroke. You can hear them yelling in the clip.

Greastest of my friends, Dave White coached me through the Lightweight process.  Giving his advice, pulling strings, even lending me his boat; he made me want to make him proud.  He was there each time I put my boat on the water and waited with me at the start, keeping me calm.  In the photo above I've just reached the bank after the last race.  He is guiding the boat in.

Here's a clip of my final.  You can hear Toby's voice and when he gets really loud the picture slips.  There is slience as I start to get back on terms with the other sculler.  And then there's Dave's voice, lower than the rest.


As I was trailing behind I remember thinking, "If you've got more, now's the time to use it.  You've got to go now".  It looks slower than it felt.  It felt tough, I could taste blood in my mouth and remember my lungs screaming.  I won.  I also won the first HWR medal Vesta had ever received.  Seconds later, my club mates won their race in the 8+ and made it a double:

I feel like I've been through a great deal with these girls.  We were constantly pushing off each other.  They are all still hugely important to me.
Posted by Charlotte at 7:52 PM