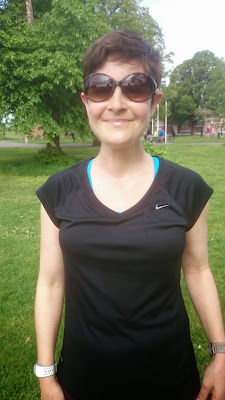 In December 2014, I was diagnosed with plural effusions, that's fluid on the lung to you and I, caused by metastatic cancer cells floating in the space between my lung and the pleural lining.  I didn't realise I had a pleural lining before this happened. In fact I just thought I was breathless due to overdoing it at a cross country race.

On New Year's Eve I had the first of two operations called a pleurodesis.  I had the second just over a week later.  This is where they stick the lung to its lining by creating inflammation with talcum powder.

I was discharged in mid-January and told I would never run or cycle again.  That wasn't such a good day.

In late January the wonder that is my oncologist popped me on carboplatin chemotherapy and the darling nurses in the chemo ward at King's College Hospital set me back on the road to recovery. I cannot express how much I love these angels of the NHS.

Somewhere along the line they found two blood clots on my lungs. I am now an haematology patient.  I take daily injections of clexane to stop any more nastiness from occurring.  I think my haematology doctor liked me.  He said he doesn't have many patients who enjoy running half marathons.

I finished chemo last week and all the external indications would seem to suggest that things have gone well.  I'll know more for certain after I've been scanned.

The point of the post is that this morning, Saturday 23rd May, I completed the Park Run in Brockwell Park.  Sam ran it too.  You should be impressed by this.  Sam doesn't like running.

Posted by Charlotte at 1:42 PM