The Boxer at Box Hill 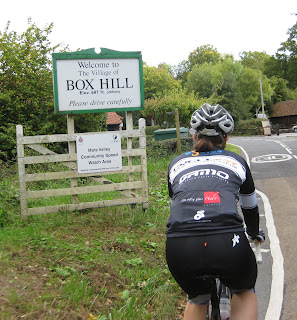 I love my Boxer. It's black, no nonsense, positive and fits me. It's one of Cyclefit's Glider range of bikes. Even the name is cool: my favourite hellenisitc statue is called "The Boxer". He's currently situated in the National Archaeological Museum in Rome. He's seated, clearly cut up from his previous fight and unwrapping the bandages which hold the caestus, an ancient form of knuckle duster, from his hands. His nose is broken and he looks tired. But not defeated.

I'm back on the Boxer because it's that time of year. I'm dragging out the mud guards, replenishing my supply of batteries for my lights and unearthing my gloves and booties from where they've been hidden in my kit draw. The Boxer is my training and early season race bike and getting back on it makes the prospect of many, many winter miles all the more pleasurable.

I rode out to Box Hill on Sunday with Sam and new convert to cycling, Sparkle. Sparkle is an old friend from my rowing days, a down to earth aussie whose take on life, love and training has always made me laugh. She's getting back into sport after a three year break. I am desperately trying not to kill her enthusiasm by making her ride the bigger, harder climbs before she's really ready. She tells me her legs are a little sore but she seemed to enjoy the ride enough to want to come back and let me bully her some more. Tired. But not defeated.

Enthusiasm is pretty important when it comes to winter training and I'm feeling fairly buoyant about things at the moment. Team mate Gabby Day came 18th at the first Cyclo Cross World Cup in Treviso http://www.cyclingnews.com/races/uci-cyclo-cross-world-cup-1-cdm/stages/stage-2/results and sort-of-team-mate Helen Wyman came 7th. I've got a lot to aspire to and feel proud but motivated to work hard this winter.
Posted by Charlotte at 9:42 PM