Lighting the Olympic flame in Hellas 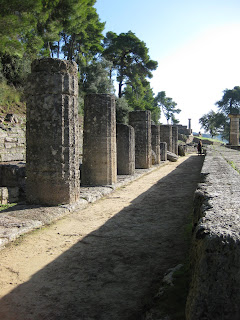 I've been trying to weave classical references into what is supposed to be a blog about my cycling. This is the only way I can justify to myself that this nonsense might actually be worth reading. This week I've been on an education tour in Greece and I have loved it. I accompanied 31 of my students visiting Athens, Delphi, Olympia, Tiryns, Epidavros and Mycenae.

I've been to both Athens and Delphi before, most recently in 2004 to watch the Olympic Games. I was meant to lead a tour following this same route in 2007 but due to a "Curious incident of the clavicle in the bike race", I've never made it south of Patras in the Peloponnese. Olympia and Mycenae just blew me away. Olympia began to be excavated in 1786 (remember that Greece is a young country) and today the ancient site is covered in evergreen oak trees, which create incredible shadows over the ruins.

We arrived early and were the first group to enter the "altis" or "sacred grove". Shortly after I had finished exploring the bouleuterion (where the athletes would swear to Zeus that they would be guilty of no foul play - reckon this would work today?), there was a deafening outburst of music from the stadium. I wondered if this were the usual turn of events at Olympia but later discovered that in fact this was a rehearsal for the lighting of the Olympic torch for the 2010 Winter Olympics to be held in Vancouver. This ceremony takes place outside the temple of Hera, which can be seen in the above photo. Back in the day, Hera had her own set of games where women only were allowed to compete. I'm glad that there was parity back then! I'm also grateful that the classical origins of our modern games have not been forgotten.

Towards the end of our stay we visited Mycenae. This is reputed to be the legendary home of Agamemnon and his treacherous bride Clytaemnestra. I believe that the site dates back to 1500 BC and Homer refers to it as "rich in gold", "well-built" and "broad-streeted". Well-built it certainly was and the city rises on a promontory high above the surrounding countryside. It's wealth was legenday and even today it isn't hard to imagine what an impressive place it must have been. I think I was pretty tired by this point in the tour but it really did get to me. The sight of the cyclopean walls and Lion Gate, not to mention the incredible views from the citadel will stay with me for many years to come.

Time to get back on the bike.
Posted by Charlotte at 9:57 PM