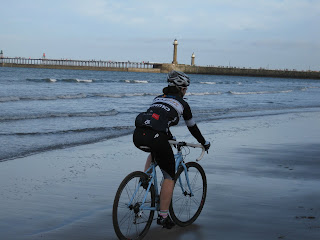 November is synonymous (at least in my head) with grey. This isn't always a fair connection. I cycled out this Saturday in gorgeous Autumn sunshine. The colours up on Ranmore common were incredible. There was a duathlon going on, appropriately named "The Ball Buster". Entrants run round an 8 mile circuit, cycle the same route three times and finish off with another lap on foot. As I was climbing Box Hill, the conditions for the somewhat masochistic competitors could not have been better. Trying to explain to the applauding crowd that I wasn't involved and that they shouldn't bother cheering me, didn't go down too well. I let them get on with it and even smiled for an official photographer.

This morning the skies were back to what I remember November for: threatening and grey. I hit the park on my cross bike. The cross bike's last outing was in Whitby, a week ago. I was staying up there in an incredible house which belongs to an old friend of Sam. The idea was to fit in some cycling and have a little holiday before returning to school at the beginning of this week.

Sam warned me that Whitby was hilly and took the precaution of fitting my road bike with rear gears so big they resembled a dinner plate. "Hilly" didn't blooming cover the half of it! (You might detect a little grumpiness here). As soon as we arrived he introduced me to the delights of Sandsend and Lythe Bank. By the time I'd finished wheezing my way to the top the poor man was bracing himself for a monumental strop. Truth be told I enjoyed the effort and later in the week made it out to Dalby Forest and back along the moor road which also takes in some quirky climbs.

Following the coast south from Whitby is Robin Hood's bay. Sam and I trundled out on the cross bikes along the stunning path which follows the East Coast. Arriving in the bay we headed down a hill so steep it felt like my back wheel was dangling over my head. The aforementioned Major Strop finally arrived as I found myself beaten by the climb back up. Thankfully, there's very little that can't be cured by yorkshire tea and an iced bun and the views as we headed even further south (towards Scarborough) have to be seen to be believed. I think we caught the last and best of the October sunshine and returned to Whitby for a ride along the beach and then up the cliff (Minor Strop) to the bench on which Bram Stoker is supposed to have been inspired to write parts of "Dracula".

We were in Whitby just as "Goth Week" (yes, that's right), was gearing up. The "Dracula" connection makes this small fishing town a mecca for Goths in the week before Halloween. There were an estimated 5000 of them gliding around in all their incredible clothes - velvet shirts and scruffy docs wouldn't cut it with these guys ... crinolines, canes, top hats, trench coats and even elaborately styled devil's horns were de rigueur. I found it all a little spellbinding.

A week on and back in Richmond under the grey skies, all of this seems a very long time ago. I've trained my heart out this week. No particular volume has been involved as I'm just trying to build up the frequency of my rides and enjoy the return to the discipline of winter milage. I got a proper soaking on Friday but know that if I want to be good, I've got to put the time in, no matter what the skies are telling me!
Posted by Charlotte at 8:15 PM