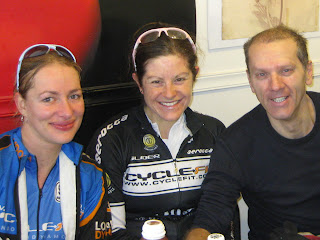 Heraclitus famously said "everything flows". I'm approaching midterm exhaustion so was very willing to go with the flow this weekend and to blow some cobwebbs away with a trip to Oxford. I'm finally into my winter training groove and have started to crack longer mid-week rides, coupled with more effort at the weekend. I've also had parents' evenings to contend with and have been squeezing in a run between the end of school and the beginning of the later session. I'm enjoying a return to my trainers and hope that it helps with the seasonal weight loss programme, which most cyclists seem to embark on.

I was due to meet Sam in West London on Friday evening for a quick escape up the M40. After a few laps of Richmond Park (no stinky stags this time, they're all hiding due to the annual cull), I headed out via Kew Bridge. I wasn't going to escape the "no travelling on Friday 13th" rule and was rather rudely driven into (oh, yes)! while waiting to turn left towards Brentford. It was just a bump but I was still knocked and wobbled about all over the road. I'm bored by this sort of sloppy driving and the "I just didn't see you" excuse wears thin when you have more lights attached to your bike than an average Christmas tree!

Several hours later and I arrived at the home of ex-teamy Naomi Anderson. Naomi is a veteran of the Women's Team Series and was a member of my successful Surrey league team a year back. She is riding better than ever and is ever more involved with Flavio Zappi's cafe ride. Flavio is an ex-pro from Italy who has ridden in the Giro d'Italia and worn the green jersey in the same race. He now owns a cafe in the Jericho area of Oxford and has started a cycling club. Naomi lives in a pretty village 10 hilly miles out of the city and we joined Flavio for a ride early Saturday morning.

Having been my usual sluggish self I'd managed to make us a little late and poor Naomi and I had to ride our socks off to make the meet. We made it and joined the "slow group", captained by the man himself. It was a hard morning's work and as I'm not quite up to fitness or speed I was suffering badly by the end. I thoroughly enjoyed the ride and would love to go back. Flavio is trying to set up a development team of youngsters and is interested in my sponsors Cyclefit and the work they do, as he want to get the guys on the most efficient, most comfortable set up.

Naomi and I had managed to mis-communicate our plans for Sunday. I had thought I was embarking on a 2 hour spin but the ride turned out to be a 4 hour trek into the Cotswolds. Proving the theory that everything does flow, I let myself be guided through some of the loveliest countryside in the UK. The wind and rain of the day before had subsided and the sun shone for us. The tea stop was fabulous and the company, excellent. More incredible is the fact that Naomi rode home again after dropping me off at Cafe Zappi, and must have clocked closer to 6 hours. Chapeau!
Posted by Charlotte at 9:05 PM