I know there has been a lacuna in my blogging activity, but some terrific and some not-so-terrific things have happened of late.


I have been given a golden bond place for the London Marathon.  This means that I will be running for a charity: Team PB .  The "PB" stands for Personal Best but also Prostate Cancer / Breast Care.


Before I cover some of the ground between my last post and my taking up a marathon place, let me explain why this year, I'll be concentrating on trainers and not tyres:

In 2005 my father was diagnosed with prostate cancer.  He had an intensive course of radiotherapy at the Royal Victoria Infirmary, Newcastle and this was successful.  He was recalled every 3/6 months for blood tests and check ups. On what was supposed to be his very last blood test and check up, 30th April 2010, he was told that the cancer had returned.

At the end of last year he went into Sunderland Infirmary for chryotherapy on the prostate.  When the doctors opened him up, they found a new cancer in his bladder.  This was removed and he was given chemotherapy.  The chryotherapy took place in February of this year.  He is still recovering.

In the interim period, my mother was diagnosed with breast cancer in 2008.  She had a mastectomy and her surgery is not complete. She continues to be unwell and is battling with new developments.

In terms of helping my parents to kick their cancers to the pavement, I have been useless. It is not something I can do for them.  Running a marathon and raising money for their respective charities is.  I've begun my training in earnest and am beginning to feel like I might be approaching fit.  The terrifying bit is that for every long run I do, I become more aware of how far 26.2 miles actually is.

I'm not completely leaving the bike behind.  I'm fitting in long cycle rides each Sunday and hope to keep this going until a month or so before the big day.  Expect posts to be about a variety of topics! 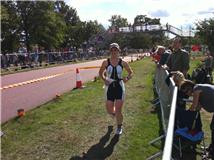 If you feel that you can sponsor me then my fundraising page is here: www.virginmoneygiving.com/Charlotterunsthemarathon
Posted by Charlotte at 5:29 PM