I'm enjoying the time away from school.  I'm still in a routine: up early with Sam, coffee, exercise and then some work. I've also managed to catch up with friends and see family.

This week I've been getting on with some cycling jobs.  I hope to race the BC National TT in September and my bike needs to meet UCI standards for me to be able to do so.  Normally I worry about this in the week before the race and then end up riding in some gawd-awful position. This year I'm being organised.

On Tuesday I dropped into Cyclefit with an Adamo saddle I've borrowed from teamie Jo McRae.  Earlier in the year I found my position so uncomfortable and the saddle so hideous that I badly screwed up a 25 when I should have ridden myself to a new PB. 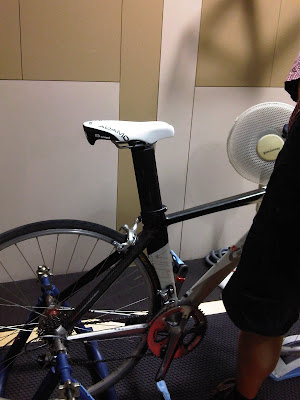 I still feel part of the Cyclefit family and it is always lovely to see Jules, Phil, Kim, Bana and the rest of the bunch. In less than an hour but with a great deal of attention from Jules and new recruit, Matt Wakeford, my position was completely altered, saddle fitted and bars brought back.  Jules took another look at my shoes and replaced the stack under my left foot to improve my contact with the pedal on that side of my body. 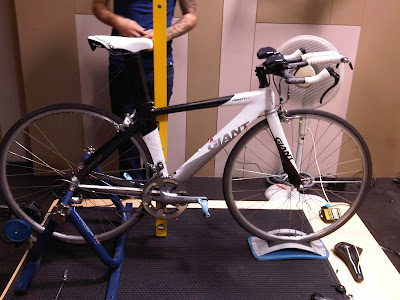 The new position makes me feel as if I'm riding a different bike.   I'm excited about trying it out at London Dynamo's Richmond Park TT this weekend.  I'm hoping that it is going to make a big difference to my ride.  We'll see!  In the meantime a massive thank you to Jules and Phil for sorting me out. 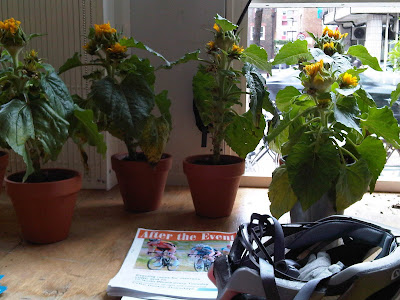 Today, after another of coach Simmonds' turbo sessions, I jumped on my bike and pedalled over to Look Mum No Hands! to catch up with some of my teamies for lunch and to watch the Tour de France on the big screen.  The cafe is beautifully decorated for the Tour and the sunflowers which are on show in the window never fail to make me smile.  By the time I arrived, the cafe was already starting to fill up for Stage 19.  There was a fantastic atmosphere and plenty of shouting at the screen as the favourites battled it out over the alps. 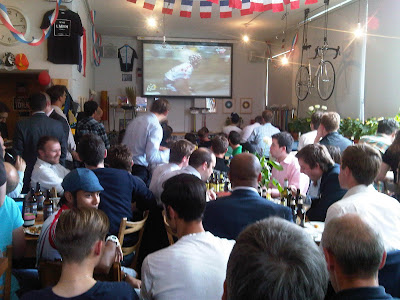 I'm so proud of the cafe and what has been achieved in such a short space of time. Well done, Look Mum!
Posted by Charlotte at 6:59 PM