In 2006, I began racing my bicycle.  My first race was at the Hillingdon circuit when I took part in the Team Quest Wednesday night series.  My good friend Kimbers had been nagging me to race and I finally caved in. 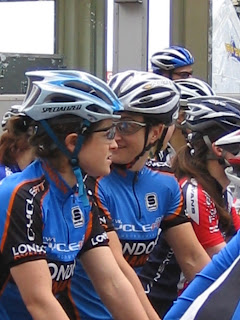 Spending half the evening on the front, towing the bunch at Hillingdon became a normal state of play for me in my first couple of seasons. Certainly my first "proper race" the women's support event at the London Grand Prix, saw me doing exactly that. 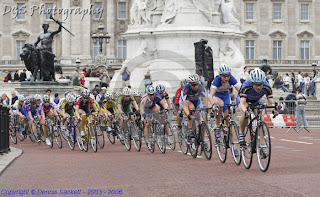 With not the first idea of what racing is about, I rode so hard I threw up on my handlebars.  I think Nikki Harris' incredible attack on lap one might have played its part in my misery.  There were a few notable faces in the bunch. Proud just to finish, I had fallen in love with bike racing.

Lesson one was learnt the hard way:  the front of the peloton is no place to be 200m from the finish.
Posted by Charlotte at 10:48 PM